Taking The Heat Off

Taking The Heat Off

Saving Energy: A Window of Opportunity

A 13-story office complex in Vancouver, British Columbia, features floor-to-ceiling windows on its entire southern face. And while those windows are an aesthetic asset, until recently, they were a liability to the comfort of the occupants in the building once the sun rose over the horizon.

According to the building's property manager, the office complex was originally constructed with windows that offered only minimal solar protection. So once the sun's rays reached the windows in the morning, the temperature would climb quickly.

In addition, there are 15 separate zones on a floor, each governed by a thermostat that automatically goes up or down, depending on the conditions. In response to the heat of the sun, the thermostats closest to the windows would activate the air conditioning - not enough to cool the overheated areas. but more than enough to make room temperatures in areas farther away from the windows uncomfortably cold.

Titan Window Films in vancouver, an authorized 3M Window Film dealer, was called in to resolve the problem. Then company owner, William Ross says, "You could stand by the windows and just feel the heat. I knew we could greatly improve the situation if we could reduce the effects of the sun on the envelope of the building."

Ross recommended LE35AMARL Scotchtint Plus All Season window film to reduce the solar warming in the building and enhance the comfort level of tenants. This low-emissivity film reduces solar heat transmission by as much as 70%, depending on the type of window.

The film will also reduce heat loss in the cooler months by as much as 30%. 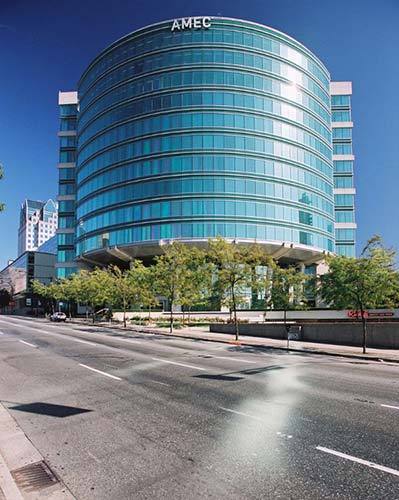 "I'm not in business just to sell products" says Ross. "I'm in business to offer clients the right solution for their specific problems."

Since the installation in 1995, the tenants, especially those who are close to windows, report greater comfort. In addition, the building's property manager says she estimates that heating and cooling costs for the office complex have dropped by 22% since the installation of 3M Scotchtint window film. And while cosmetics were not the primary concern, she agrees that the film has enhanced the appearance of the building too.

According to Ross, the installation was a relatively painless procedure. But what's more important is that, since the installation, the building manager has heard very few complaints about the offices being too warm.

There are many reasons why customers consistently select a 3M Solution rather than lesser known companies and products.

It's the 3M difference.

BC Ferries Vacation Center | Vancouver, BC

Royal BC Museum | Victoria, BC